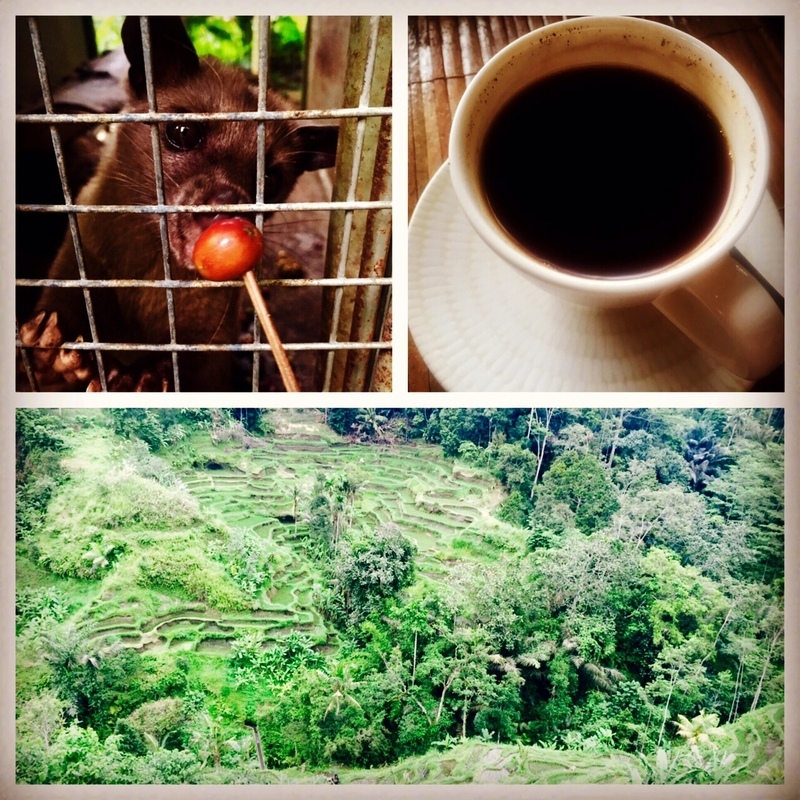 Our first full day in Ubud! We woke up and Ketut's wife made us the most delicious breakfast ever - an omelette, a Balinese pancake (think banana, coconut goodness), fresh fruit, and Balinese coffee. All served to us on our front porch, surrounded by lush greenery and the family temple. 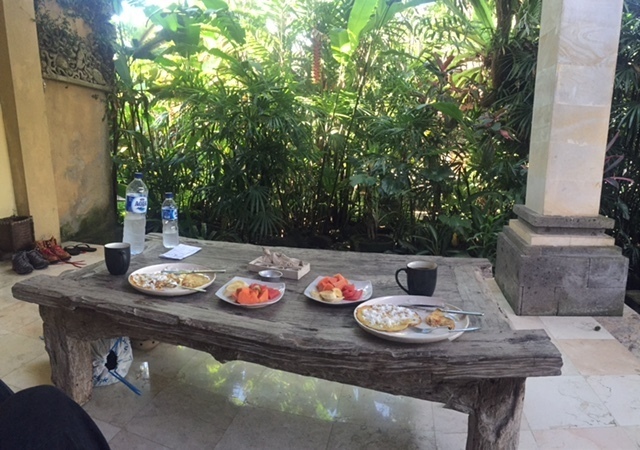 In traditional Balinese culture, an extended family lives together. When each son marries, his new wife moves into the family compound (which means sisters move out of the compound). Twenty-six people live within Ketut's compound - we've met his wife and two sons, seen some of his brothers and their families. But I do know that his family built every structure on this compound, including their magnificent temple, and they've lived here for at least 150 years. When Ketut was explaining all of this to us over breakfast he put it this way: "What's more important than your family? We go live our lives and then we come back home and have dinner and talk with family every night - they will always be there". We also learned that if anyone in the family were to stop practicing their religion (Hindu), or stop participating in traditional Balinese culture, they would be kicked out and not allowed to live on the property. 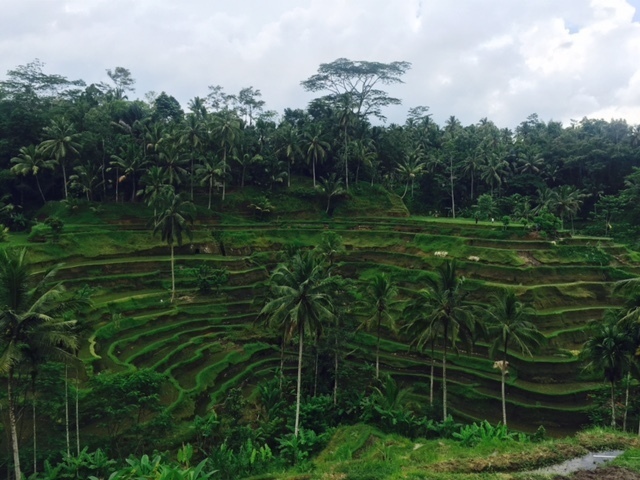 During our amazing breakfast we met two other women staying with Ketut and fam - Angela who is from Arizona, and Amani who is Canadian but currently living and working in Doha, Qatar. We opted to spend our day with Amani and had a fabulous tour of rice fields and a coffee plantation by Medhe (Ketut's second son). The rice fields are simply stunning with the vibrant green terraces interlaces with durian, papaya, and Palm trees set against a beautiful blue sky. We learned that it takes about 6 months for the rice to grow to a point where it can be harvested. We also saw some beautiful lotus flowers and got to meet a local and very talented artist. 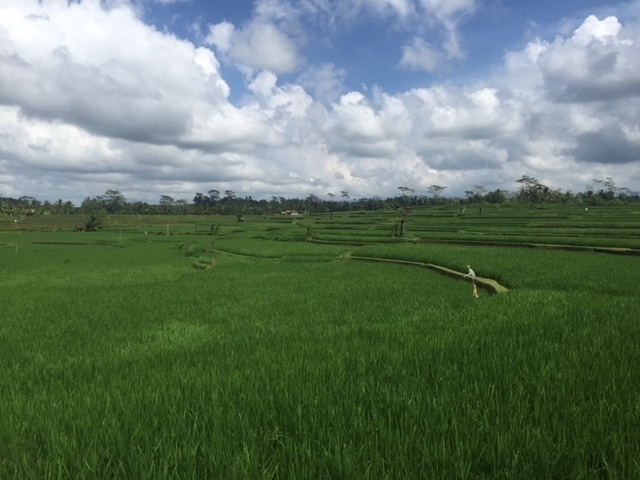 After the rice fields we went to a coffee farm where we got to see many different plants - cinnamon, ginger, coffee, cacao, pineapple, and more. We also got to see and feed coffee to luwaks. Luwaks are Asian Palm civets (look it up). The luwak eats the coffee but is unable to digest the coffee bean so it poops it out and then the coffee beans are taken from their shell, roasted, and ground. We naturally had to try the poop coffee (and others, too, including ginger coffee, lemongrass tea, ginseng coffee, and more). The luwak coffee was quite delicious, and you could taste the difference when you drank it side by side with regular Balinese coffee.

Katie, Amani, and I then headed into downtown Ubud for some food and a little shopping before yoga. Indonesian food has yet to disappoint - their ingredients are so fresh and everything is delicious and has a light feeling to it. We wandered our way through shops and made it to Yoga Barn for a vinyasa class. Practicing outside in the upstairs studio was lovely, with the sounds of birds, the breeze, occasionally a motorbike; there were even lizards "practicing" on the ceiling with us. 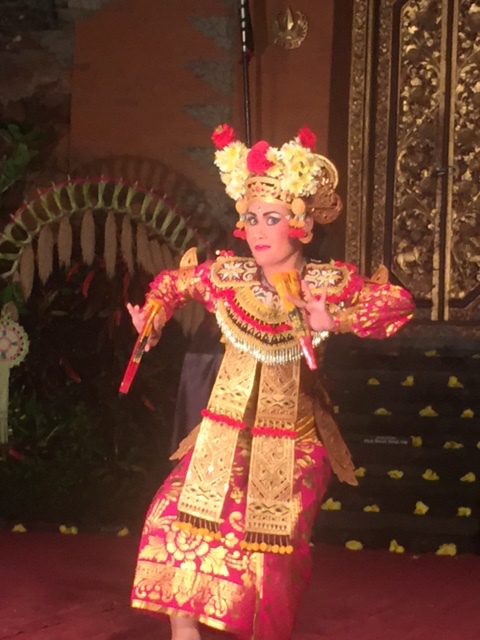 Sweaty practice done, we grabbed coconuts and juices for more shop meandering before making our way to the Ubud Palace for a traditional Legong and Barong Dance. The dancing included music played on drums, and an instrument similar to a xylophone. The first thing I noticed was how much eye movement and hand movement were an integral part to the entire dance; at some points, the dancers were completely still except for their arms, hands, head, and eyes. The dance we saw told the story of the battle between the virtue and the vice. 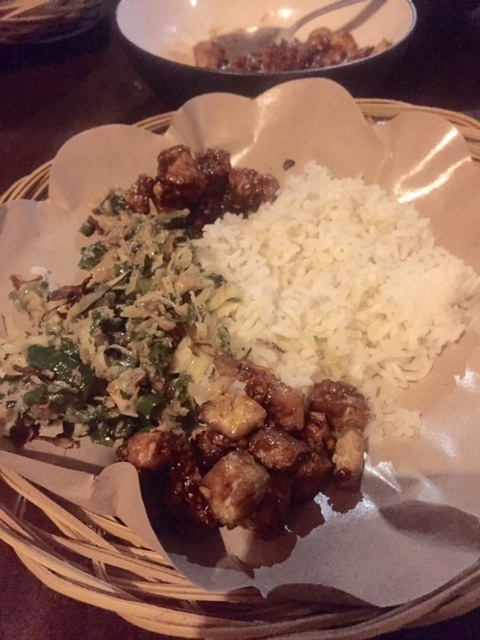 We departed the dance a little bit early to make it back home for a BBQ with Amani, Angela, and Ketut's family. Ketut's wife is an amazing cook - we ate traditional Balinese food and a lot of it! There was tofu and tempeh in peanut sauce, Balinese rice, vegetables, and skewered and grilled coconut chicken and pork satay. We were stuffed, but still had dessert - a delicious black rice pudding.

From rice fields to catpoocinos to yoga and a family BBQ, we definitely can't complain about our first full day in Ubud!