Per the suggestion of Phu (my guide from Ha Long Bay), I opted to spend 2 of my final days in SE Asia in a small mountain village in northern Vietnam, Mai Chau. Actually, Mai Chau is where a lot of tourists go, so I opted for the less visited Mai Hich, just 15 km from Mai Chau.
Once I arrived in Mai Chau with a tour bus, I hopped on the back of a motorbike for the ride to Mai Hich. I wasn't fully prepared for what I'd get, but as I watched the rice paddies go by and felt the light rain mist my arms, I decided I really didn't care. And then I got to the Homestay in the village and very quickly learned it would be an interesting stay. NO ONE spoke English. My language options were Vietnamese or the local village language. So, I acted out sleeping, and eating, and hiking. What I ended up getting was sleeping, eating, biking, and a motorbike tour of the surrounding villages. But hey, I can't complain about what I got.
About an hour into my stay a van pulled up with 5 people. I had been looking forward to an authentic experience, but an hour of not talking to anyone, made me hopeful that these people spoke English. I was disappointed, as one of them spoke some English, everyone else spoke French. So while I was not actually alone in a village, it sure felt like it at times.
The French group was nice enough to let me join their bike tour of the village. What this mainly did is prevent me from getting lost. We ended up getting a little lost anyways, but at least I was with someone who could speak to the local people to get us back on track.
Biking on the narrow paved roads meant avoiding the water buffalo shit, but we quickly got onto dirt paths. The rain of the previous few days had made them a slick mess, and as we biked I'd feel my back tire slide out every couple hundred feet. At one point we stopped and were invited to join a football game, and a little further on we were invited into a local house for tea.
What I was able to pick up from the French chatter was that the man who lived there is a carpenter, and he and his wife have two children, one of whom lives in the city with another family member. They're house was simple - a kitchen and one main room that held an entertainment center, rugs to pull out for people to sit on, and one large bed in the corner. The girls were full of laughter and kept joking about taking pictures with the older French men.
Our ride then really started to take us off track - onto unbikeable paths either covered in inches of mud or splayed with massive roots through the woods and rice paddies. Eventually, we made it back to a paved road just as it started to downpour. In my rush to get my camera in my dry bag, I hadn't noticed that everyone else had disappeared - a local saw everyone caught in the rain and invited us to stay dry.
Back at the Homestay and in dry clothes, I joined the French couples for dinner and then we were treated to a traditional dance show, which included our participation coupled with drinking a sweet liquor out of a big jug via long bamboo straws. After several sips from the straws, I was ready for bed and headed up into the stilt house where I'd be sleeping with everyone else. The windows were open, our mattresses on the floor made up and beautifully surrounded by curtains and mosquito nets. I climbed in, pulled the covers up to shield myself from the chill in the air, and promptly passed out until morning.
That morning was when I had planned to go hiking with a local guide. A local guide showed up...on his motorbike, and with two helmets. I didn't bother explaining that I had said hike, not bike, and hopped on the back.
The wind whipped my face and I pulled my jacket tighter as we passed  peanut farms, rice paddies, stilt homes, and schools. Children playing outside would yell hello to me, huge grins on their faces, and I'd waive back. We stopped a few times for photos, and again at a local market, where all of the old women said my smile was good luck. I literally could not stop smiling, even when my teeth started to chatter from the cold. It was a great way to spend my final days in Vietnam - eating and sleeping with locals, touring the countryside by motorbike, and getting stuck in the mud and rain. I was looking forward to a nap on my bus ride back, but that unfortunately didn't happen as I was busy running an experiment (see post on proposed horn honking ban). 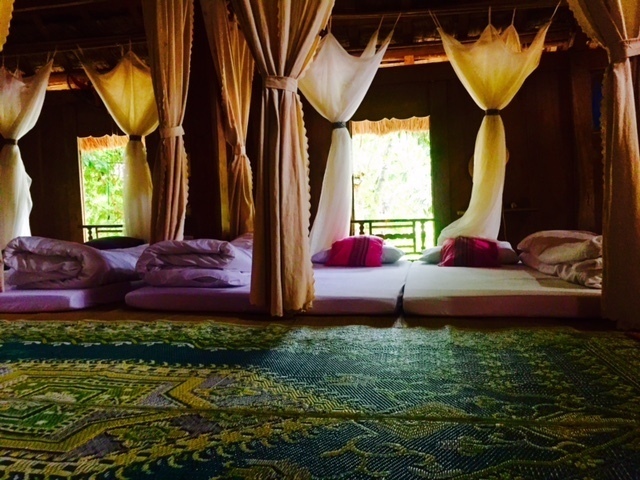