Have you started to notice a theme in my blog posts? I tend to eat my way through places, and use a bicycle as my preferred mode of transportation (partially to counter all of the eating that I do). Anyways, this trip was just a weekend trip with my best friend, Betty, and it took us across Texas. Our first stop was San Antonio - we stayed at the Omni La Mansion right on the riverwalk and the location couldn't have been better.
After checking in and changing out of our road trip attire (yoga pants and tank tops), we got a ride to the Pearl Brewery area of San Antonio for lunch. Actually, we thought we were getting a ride to a restaurant called Pearl Brewery. Nope, it's a bunch of restaurants and shops (and a new hotel opening soon), none of which are a brewery called Pearl. A little confusing, if you ask me. We opted to eat lunch at an impeccably decorated and adorable locale by the name of Cured. While the building and decor received an 'A+' in my book, the food left some to be desired. We both ordered a salad with roasted chicken - the chicken was great, the salad was more like 3 carrot pieces, 4 asparagus pieces, and half a handful of mixed greens. Needless to say we were not impressed.
We spent some time walking around the shops, got ice cream at Lick (which I highly recommend), and then headed down to the river where we were told we could get a water taxi back to our hotel. We sat, and sat, watching turtles swim (and one that was questionably attempting turtle suicide), and no boat came. We decided to walk along the river, figuring that at some point we'd see the water taxi.
We did not, and eventually opted to rent bicycles from B-Cycle, and bike our way back to the hotel. Well, up in the art museum area and Pearl Brewery area the riverwalk is wider and not packed with people and restaurant tables. Once we got closer to our hotel, things got questionable as we weaved our way between people, and miraculously managed to not end up in the river. Multiple people commented that we were brave, crazy, stupid, surprisingly dry, etc. As soon as we could, we dumped the bikes and got margaritas. Because you obviously need electrolytes after such a strenuous bike ride...
The rest of our evening was spent getting mani/pedis, purchasing my coveted heart-shaped sunglasses, and eating (shocker). Per the recommendation of various people, we went to Two Bros. BBQ and stuffed ourselves silly with mac and cheese, creamed corn, potato salad, ribs, brisket, and stuffed jalapeños. I'll hand it to them on the mac and cheese, creamed corn, and jalapeños, but the rest was just okay. It didn't stop us from eating though, and it put us in quite the food-induced coma that carried us through the night.
Friday morning, we woke up bright and early to some light rain and surprisingly hungry stomachs. We grabbed bikes from B-Cycle again and instead of biking along the river opted to bike on the roads - all the way passed Pearl Brewery to a Mexican restaurant called El Milagrito Cafe for breakfast. Once again, somewhat disappointed - I am a self-proclaimed chilaquiles connoisseur and what I go were not chilaquiles, but more like migas. That said, the horchata I added to my coffee was on point, and the tortillas could be eaten plain they were so good.
We jumped back on the bikes and made our way back to town for a quick walk through of the Alamo before packing up and heading out. While we weren't particularly hungry we knew we had a long drive through what I will affectionately call the "Nothing" part of Texas, so we obviously had to stop at In 'N Out for burgers and milk shakes. If you haven't had In 'N Out, I'm sorry, and if you have, you know that every time you have it its just as good as the first.
We then started on our 5.5 hour drive to Marfa, through some rain, lots of sun, and stunningly beautiful landscapes as I was serenaded by Betty's snoring. 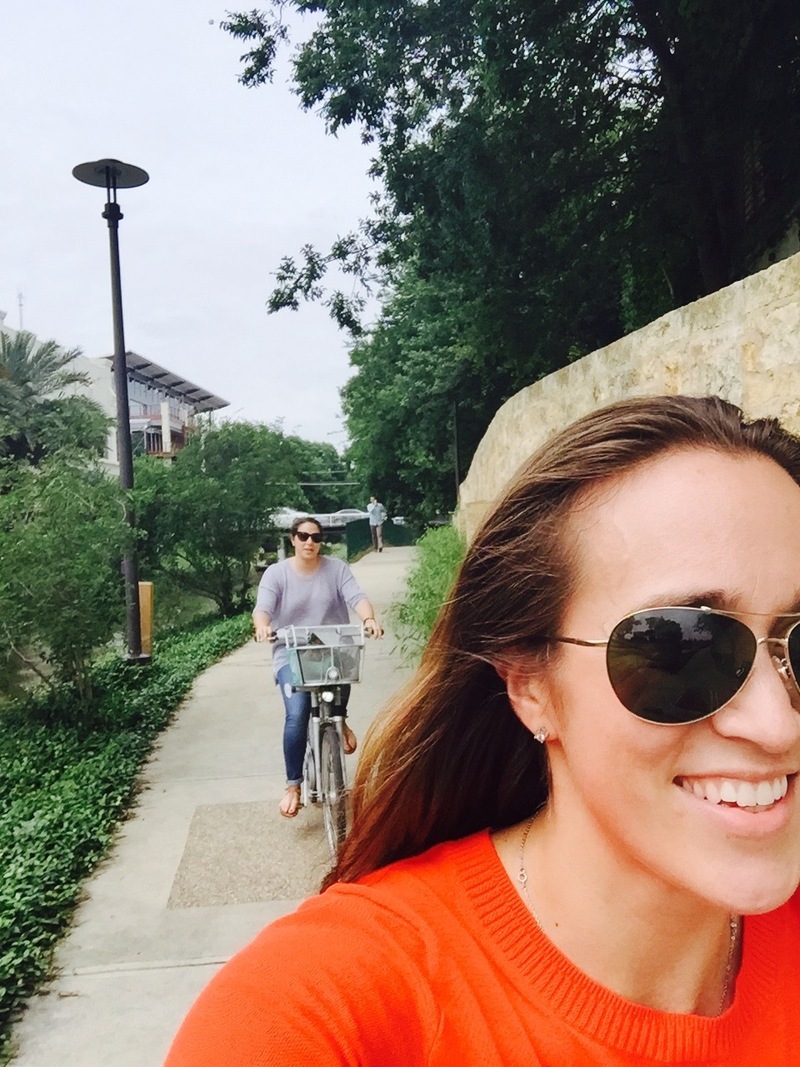