Katie's last night in Thailand, I was filled with anxiety in anticipation of heading to Vietnam on my own. Sure, I had traveled alone before, but I was younger, fearless, and didn't doubt myself at all. She got in a taxi around 11pm; I went to bed and tossed and turned, worried I'd miss my early morning flight to Saigon, worried I'd hate traveling alone, and thinking that maybe I should just change my flight and fly home. Growing up my mother used to always say that I could be put in a room knowing no one, and would immediately make friends. Since I've been older, I've questioned how much this is true, and as I laid in bed, I really believed I'd lost this ability and that I'd spend the final 2-3 weeks of my trip lonely.
But I woke up, got to the airport, and headed to Saigon where I almost immediately took a nap. Yes, I was tired, but I was also scared to go explore the city - I had no idea where I was, the traffic was simply insane, and the language barrier was overwhelming. Very few people speak English, and those who do often speak very quickly and with a thick accent, making it difficult to understand. After a brief nap though, my hunger overcame me and I hit the streets of Saigon, timidly crossing the streets at first, then just walking straight into oncoming traffic. I had been given warnings of the traffic here, and boy were they right.
Most people in Vietnam have motorbikes, as the taxes on cars are too high to make it affordable. And the motorbikes rule the road - they do not stop for lights, they go the wrong way down one way streets, they even drive on the sidewalks if that's more convenient. The rules of the road for pedestrians that I had been told by various people are as follows:
(1) It doesn't matter the color of the light, cars will still go.
(2) Look both ways, even on one-way streets.
(3) Slowly walk into traffic at a constant pace. Do not make any sudden movements.
(4) Make eye contact with the drivers. (This is difficult when they are coming from all directions).
(5) Just go for it.
I'd like to add numbers 6 and 7:
(6) Everyone will be honking their horn. Do not turn to look, your toes will get run over.
(7) Do not wear flip flops, especially broken ones that may come apart in the middle of the street.
(Note that neither of these happened to me, though number 7 almost did because of my beloved Havianas that I couldn't part with).
My first meal was naturally pho, and it was delicious (not to mention I had wifi so I could figure out where I was and where I wanted to go). My wandering brought me to Ben Thahn Market, which caters to both locals and foreigners. The market consists of narrow walkways between stalls overflowing with everything from chopsticks and other souvenirs, to delicious treats and Vietnamese coffee, to every knockoff you could imagine (the typical Louis Vuitton and Prada bags and wallets next to ones I haven't seen on the streets of NYC such as Tory Burch, Jimmy Choo, Goyard, Nike and Converse shoes, and North Face jackets). After purchasing a pair of cheap flip flops, I headed back towards where I ate pho to steal the wifi and was pleasantly surprised to find food stalls had opened. Per usual, I used my nose and checked where the locals were to figure out where I'd eat. But then a new challenge arose - in every other country I've been in on this trip, there was a menu in English giving me some idea of what I was eating. Not the case here. Luckily, I've since learned to just point to something that looks good on someone else's plate and its proved relatively fruitful. This time I lucked out - there was a man who spoke English so he ordered for me and we sat down for a beer. Just by chance, he was Vietnamese, but lives in Philly, and was simply back visiting family. Small world for sure!
(A little side note about eating street food in Vietnam - they use mini tables and chairs, like child sized. So you are almost sitting on the ground, knees into your chest. It's very strange but it's everywhere).
I headed back to my apartment, knowing that I had an early morning, and unsure of crossing the Ho Chi Minh city streets in the dark. While sitting in the living room, I heard the lock turn and, low and behold, it was an American (not the person I rented from). She was staying in the other room, and we immediately hit it off, both happy to have someone to explore a bit with.
I spent the remainder of my time in Saigon realizing that I hadn't lost that ability after all. On tours, at restaurants, and even just walking around the city I met new people: fellow Americans, Vietnamese, Australians, even a Parisian. I've realized maybe my mother was right (clarification: not about everything, mom) and I haven't lost the ability to meet new people, to venture off on my own. I very quickly realized I've got this - whether it's my solo travel or possibly moving to a new city. It'll all be okay. 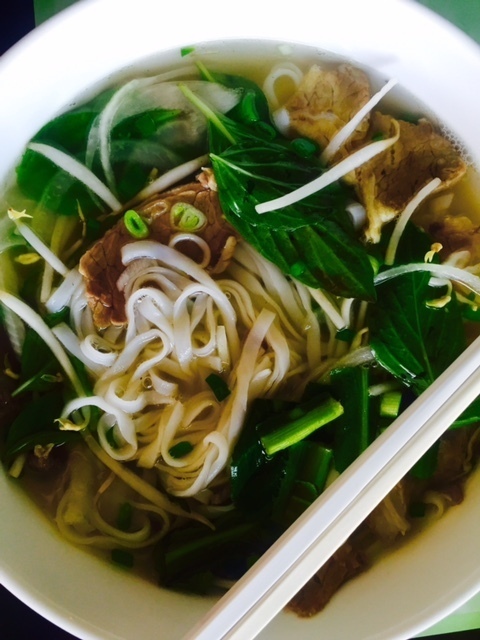