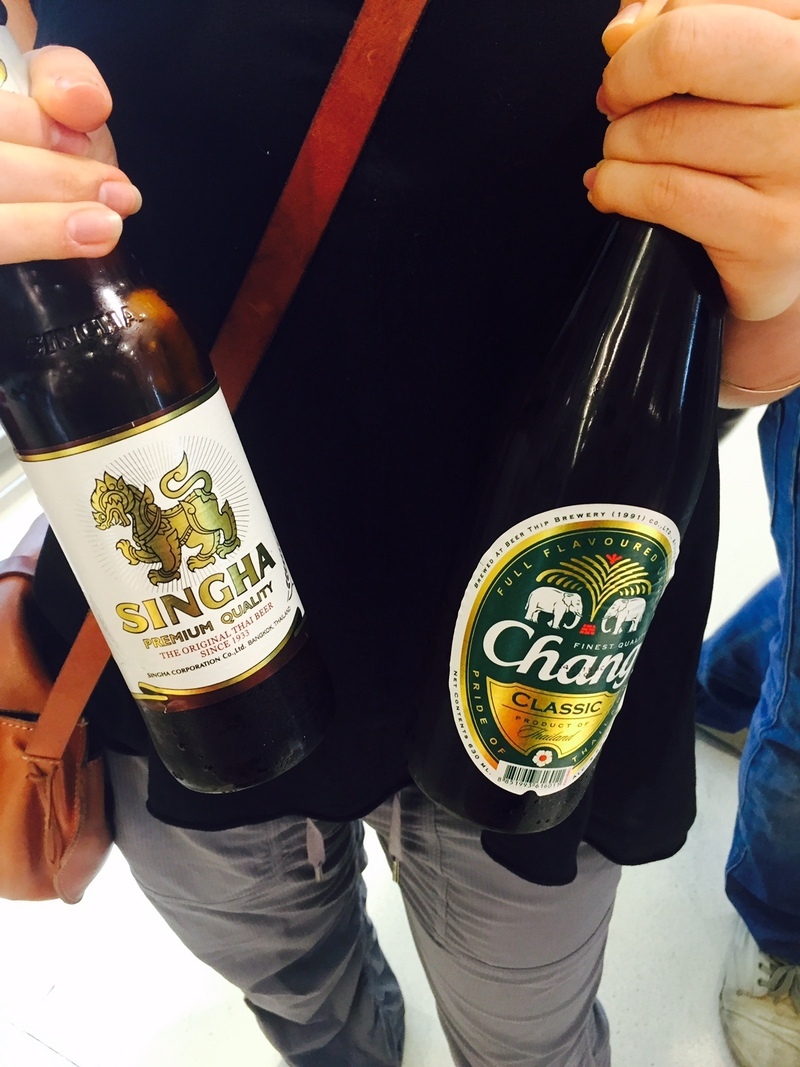 Our last day in Bangkok before Bali delivered. We took the train to the Chao Phraya River that runs through the city, and hired a long boat for a one hour tour of the canals. It was beyond interesting to see this other side of Bangkok, where people live literally on the water, and to see the juxtaposition of new modern homes next to old, dilapidated houses, all intertwined with marvelous temples and shrines. There were storefronts that face out to the canal, so people can buy necessities from their boats. And there were areas where nature had taken over with lush greenery. All of this was complimented by an ice cold Singha that we paid a whopping $4 for (and were not ashamed because it was so good).
Side note: there are two Thai beers - Singha and Chang. Naturally, Katie and I had to try both and wow were we disappointed in Chang. If you're ever in Thailand, Singha is the way to go. 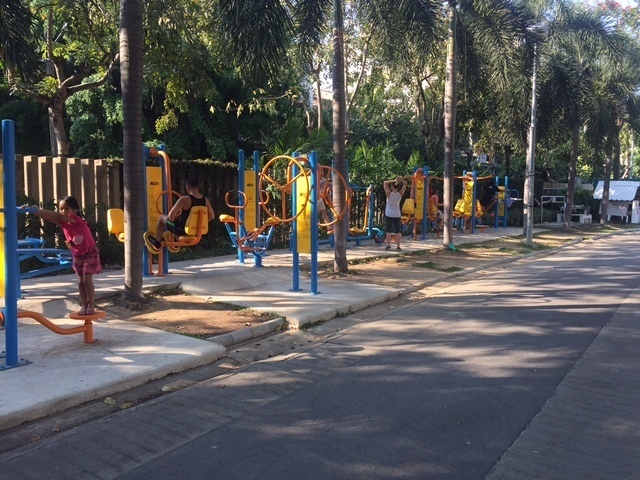 After our tour we wandered through the streets and made our way back to the hotel. Along the way we stopped in a small park and were blown away by the body weight exercise equipment (we gave it a test drive). A little relaxation after our workout and we were off to see our first ever Muay Thai (Thai boxing) match.
One of the workers at our hotel walked us out to the street to hail. This man is one of the happiest old men ever. As we walked past food stalls and shops, he'd smile and chat with everyone. He proudly pointed things out to us, such as the impressive high rise down the street. Despite it being rush hour (which I think it's maybe always rush hour in Bangkok), we got a taxi and made our way to Rajadamnern Stadium. Rajadamnern Stadium was built in 1945, and Muay Thai has been a Thai sport since the Sukothai period which ended in 1767 AD. Muay Thai originated as hands on combat in times of war, but later became a sport. It is considered full body combat, and is the only combat sport that uses punches, kicks, elbow, and knee strikes.

The hustle and bustle of the stadium hit us the minute we stepped out of the cab. There were food stalls, people selling tickets, a plethora of motorbikes, and gamblers placing their bets. We splurged on our tickets - $60 for ringside, knowing that it would give us access to the entire stadium. We settled into our seats, and just like at any American sporting event, paid an astronomical amount for beers (Singha, of course). We were close enough to see the beads of sweat dripping off the fighters insane abs. These men were ripped. That said, they were also tiny. The 9 matches of the night ranged in weight class from 109lbs to 126lbs, with the 126lbs match being the highlight. Before each match the boxers do a ritual dance around the ring and pray in each corner - it was quite surreal to watch. Each match then consists of 5 rounds, and typically the first round isn't very exciting as the fighters feel each other out. Between rounds the fighters get doused in water, pumped up by their coach, and rubbed down with what we believe was an oil of some sort. The excitement of the whole evening did not disappoint.
One of the benefits of spending $60 on tickets meant that we could really go anywhere in the stadium - so we did just that. After one of the fights we wandered back into where the boxer had gone and found him giving an interview. His family and coaches surrounded him, and we learned that family members who cannot afford tickets can sit in the back and watch the match on TV. We took pictures with this fighter, and then went to watch the peak match (the 126lbs weight class). 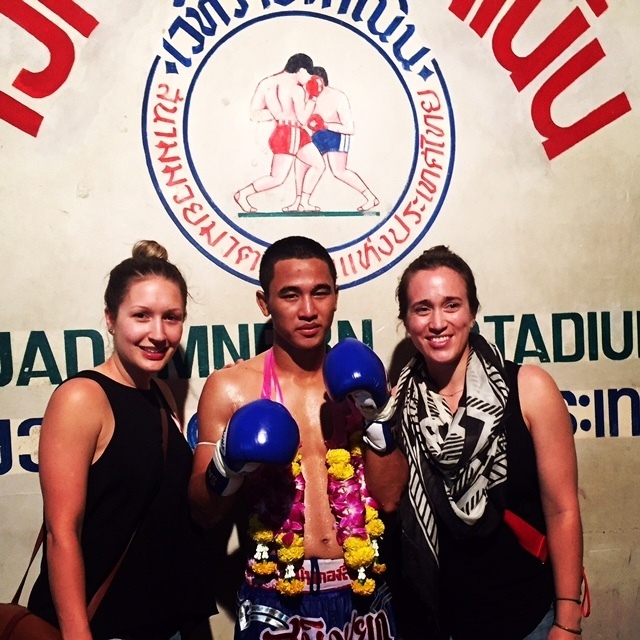 All of the matches were entertaining but there was typically a clear winner. This match was different - there was not a moment that didn't have us on the edge of our seats. Once the match was over we got to take a picture with the winner. He was quite sweaty, and had a deep gash above his left eye from the fight. We could've stayed for 2 more matches, but hunger had hit us so we ventured out.
Our plan had been to get some food and go home. Well that plan did not happen. We grabbed a taxi to a street near where our hotel was with the hopes that food stalls would still be open. Luckily they were. And then we followed our noses and noticed where the locals were eating to decide which place we would eat. Across from us there was a Thai man (Tick) and an expat (Martin) eating and drinking, so naturally I asked them for food recommendations and wow did they deliver. We had an amazingly spicy lemongrass chicken soup, sticky rice, and delicious pork. 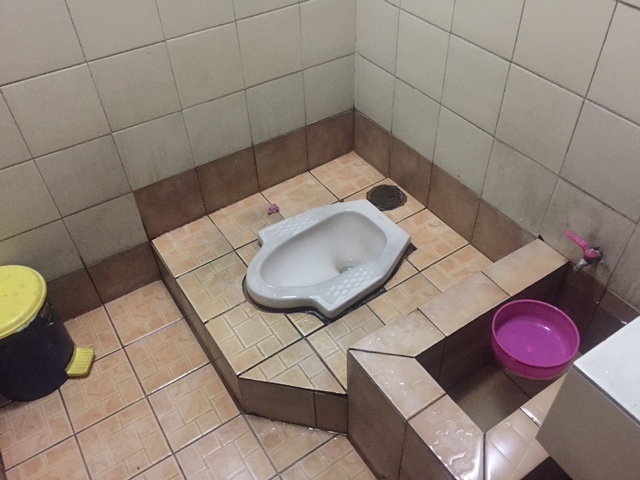 It became very clear that the night would not be ending early, as Tick and Martin invited us to join their table. Tick ordered more food for us to try, and we helped them a bit with the bottle of Johnny Walker on the table. We learned to make little rice balls with our hands to soak up the juices of the pork. We also learned that Tick works in the tourism industry (he will now be our tour guide when we go back to Bangkok) and Martin is a film director who lives half the year in northern Thailand (and may hook me up with some travel opportunities if I push my flight back). The entire experience was so amazing and made Katie and I both feel like we were really getting to experience Bangkok. Hell, it even included multiple trips to the gas station squatter (which was not a fun experience in flip flops). 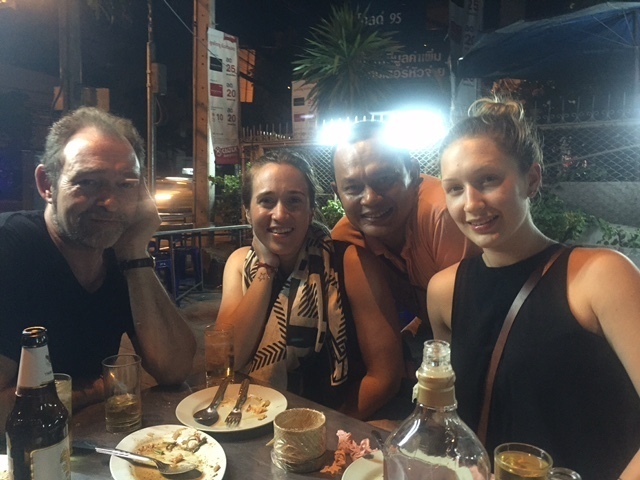 Martin and Tick kindly ushered us back to our hotel a mere 90 minutes before our taxi to the airport would be coming. Needless to say, the flight to Bali would be rough, but it was all well worth it for what was easily our best night in Bangkok.