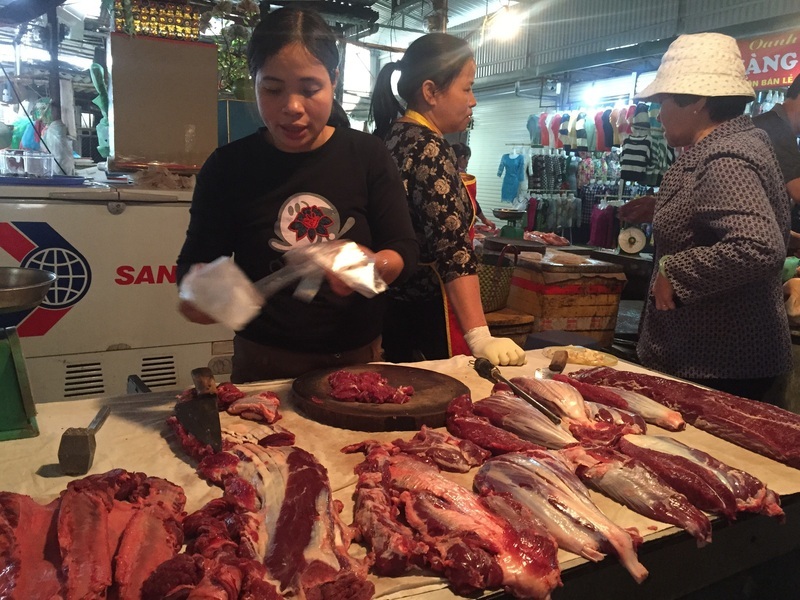 I was unsure of what to do with my final day in Vietnam – the only obvious thing that I would be doing was eating all of the Vietnamese food that I possibly could (while trying to save some room for sushi in Tokyo). The obvious activity was a cooking class, and boy did I luck out – private lesson!

Bright and early, I was picked up at my hotel in Hanoi and taken to a beautiful house right on the banks of the Red River. We sat outside, watching fishermen on the river, and discussed what I wanted to make. Little did I know, we’d make EVERYTHING - clams with lemongrass, stir-fry morning glory, green papaya salad, grilled pork with rice noodles, Hanoi grilled fish (and more that I don’t remember). Then the tough part came – learning what was needed for each recipe, and how to ask for it in Vietnamese. That’s right – this cooking class included a trip to the local market where I was responsible for getting the necessary ingredients. Uh oh…

Once I successfully faked my comfort with speaking in Vietnamese, I was handed some Vietnamese dong (yes, the 7-year old boy in me laughs each time), and we hopped onto bicycles and headed down an alley, away from the river. As I pedaled, following my guide, I began to notice that I was literally the only foreigner in the area – and I wasn’t the only one noticing that. People were waiving to me as the sights and sounds zoomed by. I was really getting to experience the city sans other tourists trying their best to bargain or cross the street.

Before I knew it, we arrived at the market, left our bikes with a little roadside restaurant and headed in. I was immediately overwhelmed. Despite being mid-morning, the market was still bustling and my eyes darted from one stall to the next – vegetables, fruit, beef, fish, poultry, dried goods. It was amazing how organized the space was amidst the chaos – people on foot, on bicycle, some people even brought their motorbikes right up to each stall. I immediately noted that I should pay attention to my feet – flip flops were a bad choice for fear of losing a toe to a motorbike or stepping in some of the foul looking puddles on the ground. Then there were the smells that all merged into what I can only describe as a mildly sweet, rotting scent.

My guide quickly pointed me to a pork stall and said I should order pork belly. Uh oh, that meant I needed to remember how to ask for things in Vietnamese and how to understand the response. Luckily I had a little cheat sheet that I pulled out as I slowly attempted the pronunciation of “How much for 200 grams of pork”. The woman chuckled, gave me a response, and I quickly accepted. My guide told me that the price was okay, but that I should try bargaining next time. The process went on like this for an hour – I’d ask for something, attempt to bargain, and then get it. My guide jumped in a few times when it was clear that I had no idea what I was asking for (or, more likely, I was pronouncing something incorrectly and asking for pig brains when it was clams that I really wanted). (Note: I do not know what pig brains are in Vietnamese, or clams, so it is very likely that these two things sound nothing alike). The following few things broke up the time in the market:

(1) The tiniest kitten ever, which I immediately spent the following 10 minutes petting, unfazed by the fact that it was likely covered in fleas.

(2) The stall immediately adjacent to where I purchased the pork. I couldn’t stop staring out of disgust and awe. I had heard that older Vietnamese still ate cat and dog (and, therefore, avoided red meat when I was eating from street stalls), but I hadn’t seen it and I really didn’t want to believe it. But there it was – a dog on the cutting board. And people were actually purchasing pieces! (Side note: I realize that the thought of eating a cat or a dog is repulsive to me, because in my mind these animals are pets. If I had grown up eating cat or dog because I had no other meat options, I would likely have a different view).

(3) The stall with live pigeons stuffed in a cage with zero room to move. And then the yanking of a pigeon in said cage and the plop as it hit boiling water.

Despite my lack of language skills and my short attention span on what we were actually doing, we managed to purchase everything on our list, grabbed our bikes, and headed back to the house on the river.

It was cooking time! I was unsure how long I’d be in the kitchen given the number of dishes we were making, but luckily I had help from my guide and the chef at the house. Almost immediately the delicious smells wafted into the air (amidst the not so delicious smell of fish sauce, which we used in almost every dish as it’s a staple of Vietnamese cuisine). As we cooked and tasted, I shared a beer with the head chef, and we discussed life in Hanoi and the other areas of Vietnam that I had seen. Before I knew it, I was sitting outside filling up on all of the delicious food we had cooked, and talking with my tour guide about tattoos and where to buy various cooking supplies to bring home.

After stuffing ourselves to the point of sickness, we ate a bit more, and then my guide kindly offered to take me on her motorbike to buy a few things. I immediately accepted the offer, which was then followed by a few skipped heart beats as I realized that I’d be getting on a motorbike in the city. (Side note: the traffic in Hanoi is no different than that in Saigon – cars, motorbikes, bicycles, and pedestrians just go with the hopes of not colliding). Luckily, by this point in my trip fear was a thing of the past, so I grabbed the helmet and hopped on the motorbike. I didn’t even hold on, as I was preoccupied with videoing the craziness as we zoomed through the streets of Hanoi, stopping to purchase various fish sauces, oyster sauces, seasonings, and the ever-important extra-long cooking chopsticks.

I went to sleep that last night with a fully belly, two bags bursting at the seams, and the corners of my mouth turned up. I had done it. I had traveled for almost 6 weeks, half of which was solo, made new friends, experienced different cultures, and not once did I let my fears stop me. I realized now that my fears are never going to go away, but I found that courage that I thought I’d lost.