One of my splurges on this trip (besides all of the unexpected ones that occurred at the tailor in Hoi An) was my three day/2 night cruise of Ha Long Bay. And after my hike and night bus where I didn't sleep much, I was in need of some luxury!
Day one started with nine of us piling into a shuttle bus for the 3.5 hour journey to Ha Long City. As you can imagine, I was the only solo one, and was joined by a Canadian family of four, a German couple, and an Australian couple. I almost immediately thought, "Well, looks like I'll be spending a lot of time alone these next few days" as I dozed off on the bumpy ride.
As we arrived at the port and were taken to our boat, Treasure Junk, I started to think I had overpaid. The boats on the bay are all called junks, and from the outside they look just like that; in fact, they look like one small wave may sink them. "Good thing I know how to swim", I thought.
Once on the boat, however, that all changed, and I realized I would be getting the luxury I craved. The main deck consisted of a large dining area decorated with dark wood and tangerine fabrics, a bar and indoor lounge area, and then outdoor seating on the deck. Above it there was a sun deck with lounge chairs. The lowest deck held the cabins - mine was in the bow and I could lay in bed or stand in the shower and watch the limestone peaks pass by.
After settling in, it was lunchtime on the boat, and I was lucky to join the Australian couple, Rachel and Anthony, instead of sitting alone. I quickly learned they have three children, but were enjoying a vacation to themselves. Little did they know, they'd have a 4th daughter for their 3 days on the ship, as I joined them over every meal and activity.
The main activities during the 3 days on the boat included relaxing (sometimes with a book), watching the changing yet somehow constant landscape of Ha Long Bay pass by, sleeping, spa treatments, kayaking, and visiting a floating village. Oh, and eating. Eating was a big part of our time in the bay, and I think if they had kept us on board for another day, the ship may have sunk. There's only so many 6+ course meals one can take.
Kayaking was one of my favorite parts of the trip, and each time we went out, the conditions were completely different. On the first afternoon, the water was glass, perfectly reflecting the limestone islands we paddled around. The only sounds were the chirps of birds, the slight splash of paddles hitting the water, and the swoosh as our kayak glided forward. I was paddling with Phu, our guide, and as we glided along he told me about his travels, his family, and life on the bay. He informed me that we were actually in Bai Tu Long Bay, which is a less touristy bay adjacent to Ha Long Bay. Ha Long Bay translates to Dragon Bay, while Bai Tu Long Bay is Baby Dragon Bay. The kayak trip was short but included passing through a small cave, and as we paddled Phu collected the trash that has unfortunately accumulated in the bay.
Our second kayaking experience was the next day, and boy had things changed. The wind was blowing, making the paddling slightly more difficult, as waves lapped over the front of the kayak. This time we were in Ha Long, and paddled for several hours. The trip included a stop at a beach where we were the only people in eyesight. I couldn't help but think that Johnny Depp was going to come out from behind one of the islands in a pirate ship, and wish that Leonardo Dicaprio would suddenly show up on our deserted beach. Neither of those things happened, but the kayaking through the mist of the bay did not disappoint.
My third time kayaking I went solo, tagging along with another group and collecting trash. The presence of garbage in the bay is astounding and sad - I picked up plastic bottles, plastic bags, candy wrappers, and food containers.
While the kayaking was fun, the food was delicious, and the scenery breathtaking, the best part of my 3 days on Ha Long Bay was the company. Rachel and Anthony took me in right away - we told stories of home and our travels, we laughed, and I gave them fair warning about the (financial) dangers of Hoi An. Overall, my time on Ha Long Bay was great and full of some necessary relaxation at the tail end of my trip. 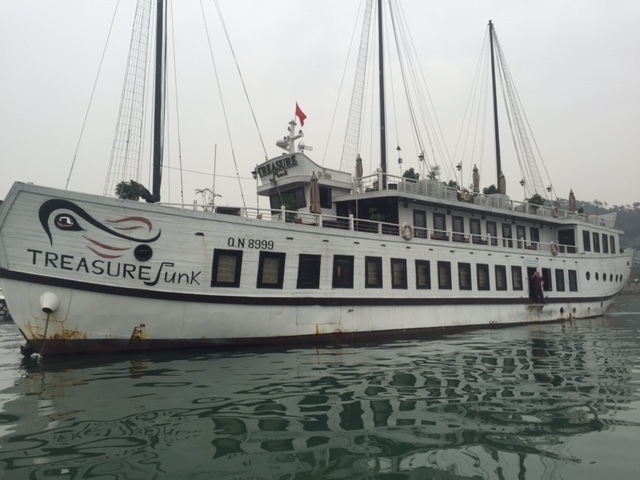