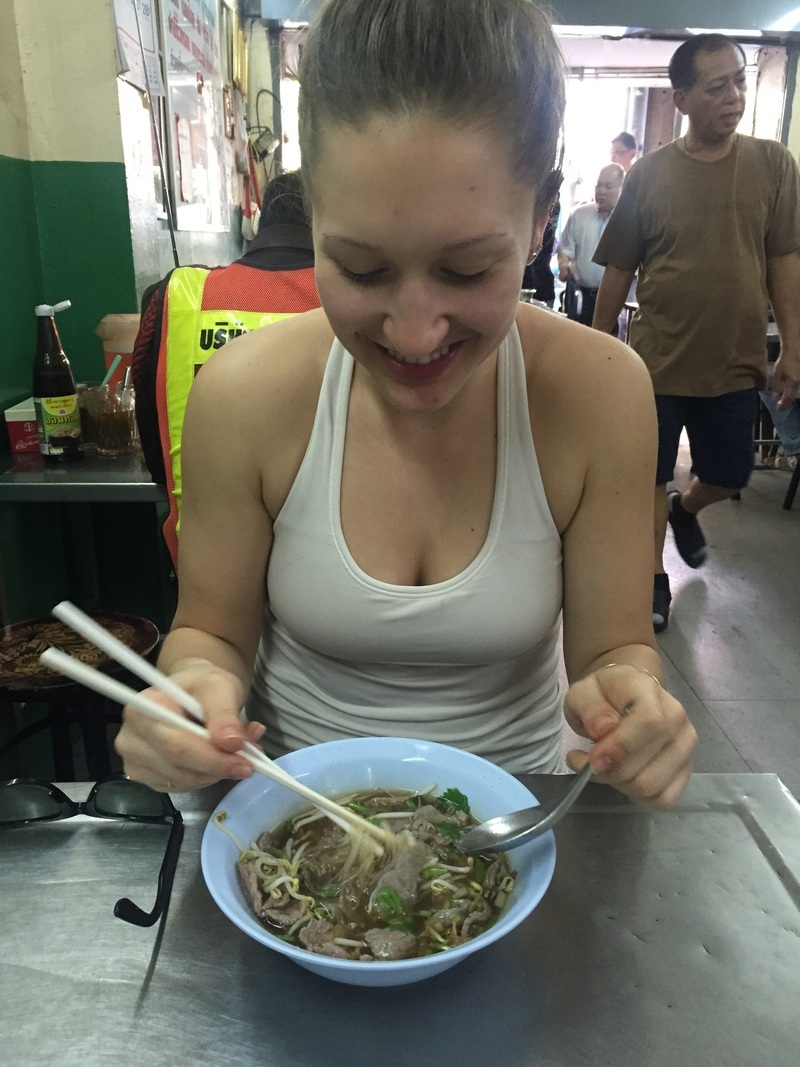 Guys, this title is no joke. Basically we ate in Thailand and found things to do between meals. And sometimes the thing to do between eating meals was eat snacks.

Our first meal was a place we'd go back to multiple times. As we had walked in the wrong direction to our hotel we passed a little open-air shop that was emanating a delicious smell out into the street; when we saw it was full of only locals we knew that would be our first meal in Thailand. And it did not disappoint. After returning from dropping our bags off we were whisked to a metal table with a fan overhead and were very quickly brought what is quite possibly the best beef noodle soup I've ever had. The broth had been cooking all day and then simply tossed in some beef, a handful of veggies, and vermicelli noodles. As we are the smell continued to waft into our noses and the heat of the soup combined with the scorching outside temperature and humidity made us sweat. In the four times that we went back for this soup, we did not see any westerners, and the only thing that changed each time was the type of noodles we got. I'm salivating just reminiscing about it, and hope I can figure out what it was and how to make it.
Later that night did not disappoint either, as we walked out from our favorite lady-man massage place and found the street full of food options that had popped up as the sun went down. I found a woman cooking pad thai and Katie found some basil chicken, and we chopstick-shoveled our food in our mouths and walked down the street. As we continued to walk down the street we started to compile a list of things we needed to try: the fried chicken, the chicken and pork satay, the whole fried fish. Basically, we used our noses and saw where the locals were eating to determine where and what we'd eat.
Per the suggestion of a friend, we tried the food court at one of the many high-end malls in Bangkok: Siam Paragon. First we were taken back by the sheer size of the mall, then by the stores in it. We did not expect a mall full of Valentino, Pucci, Prada and other high end designers, not to mention the car floor which had the likes of Porsche and Maserati. But we were really there to eat, and that we did. We found the food court, deposited money on food court cards, and went to town. Between the two of us we ordered at least four full meals. While some of them were tasty, others disappointed a little. And none of them compared to what we had found on the street, though a brief reprieve from the heat was nice. We also tried durian ice cream (the only way I'd suggest trying durian, though I wouldn't even recommend that), and found a gourmet supermarket that we knew we'd be back to.
Another memorable meal happened the night before we left for Bali, when we met an expat and Thai at an outdoor restaurant. Besides drinking a bit too much, we also are quite a lot because Tick, the Thai guy, kept ordering more food for us to try. First we had a spicy lemongrass and chicken soup that was delicious and HOT. That was followed by some deliciously marinated meat and rice. This was a pivotal meal, as we learned to eat the way locals do: grab some rice in your hand, roll it into a tight ball, and then use that to soak up the delicious sauce that was used in cooking.
After Bali and before Cambodia we had more eating time in Bangkok and that's just what we did. The last two memorable dishes were once again street food. We finally tried the fried chicken from the guy outside of our massage place and wow was it tasty - definitely gives the south a run for its money! And the final wow came from a snack when we weren't even hungry. We were strolling through our neighborhood market, both tired and not hungry, when we walked passed a cart that had the most delicious smell wafting into the air. It literally stopped us in our tracks. Once we went over we looked and saw what looked like fried green tofu - we didn't care what it was, we were trying it. She put some in a bowl, poured a soy sauce with chilis over it, and handed it to us with two toothpicks. We went to town, no breathing, just eating. It wasn't until later that we learned that these were choice dumplings, and our attempts at finding chive dumpling lady again proved futile.
Needless to say, Katie and I did a good job of eating all the Thai food, and I can't say either of us regret it even if it causes us to gain a few pounds.