Thanks to recommendations from two grad school friends (Emily and Jaime!), we spent our day on a fabulous bike tour (Bali Eco Cycling). I highly recommend it.

When our 8am pickup arrived, we were happy to find 4 other energetic girls in the van - Jenna from Canada, Harriet from England, Yoska from Holland, and Chelsea from Oz. We really couldn't have asked for a better group! 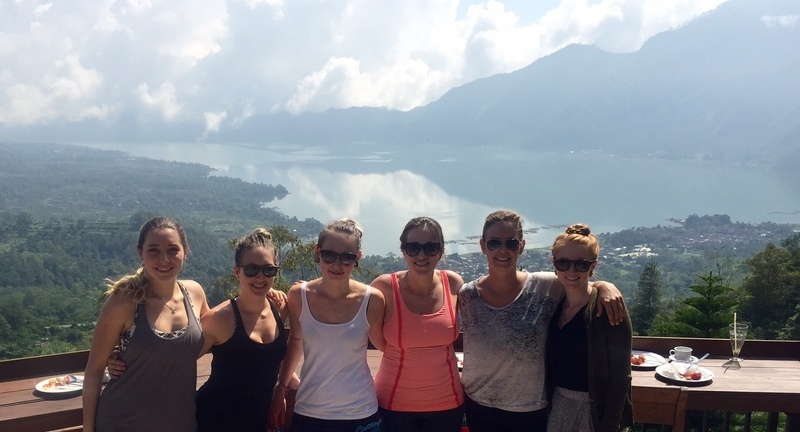 That said, we were all quite hangry. Luckily the first stop was breakfast with an amazing view of Batur Volcano and Lake Batur. Batur Volcano is active, and we could see areas where lava had previously been flowing. Filled with eggs, rice, Balinese pancakes, fresh fruit, and coffee, we piled back into the van and drove to a coffee farm where we (once again) learned about luwak coffee and got to taste a myriad of coffees and teas. This time, however, we also got to taste various fruits (guava, tamarind, and snakeskin fruit), as well as Balinese chocolate.

Then it was off to our bike ride! We got our mountain bikes, grabbed helmets, and headed downhill! The first stop was at a traditional Balinese family compound. Here we learned the following:

• One of the buildings in the family compound is used for the oldest family members (grandparents, typically). It is actually higher than all of the other buildings (which is humorous since stairs can be difficult for older people).

• The first building is the kitchen. We got to look inside this family's kitchen - it was very simple, but had the necessities and some well-seasoned pans! 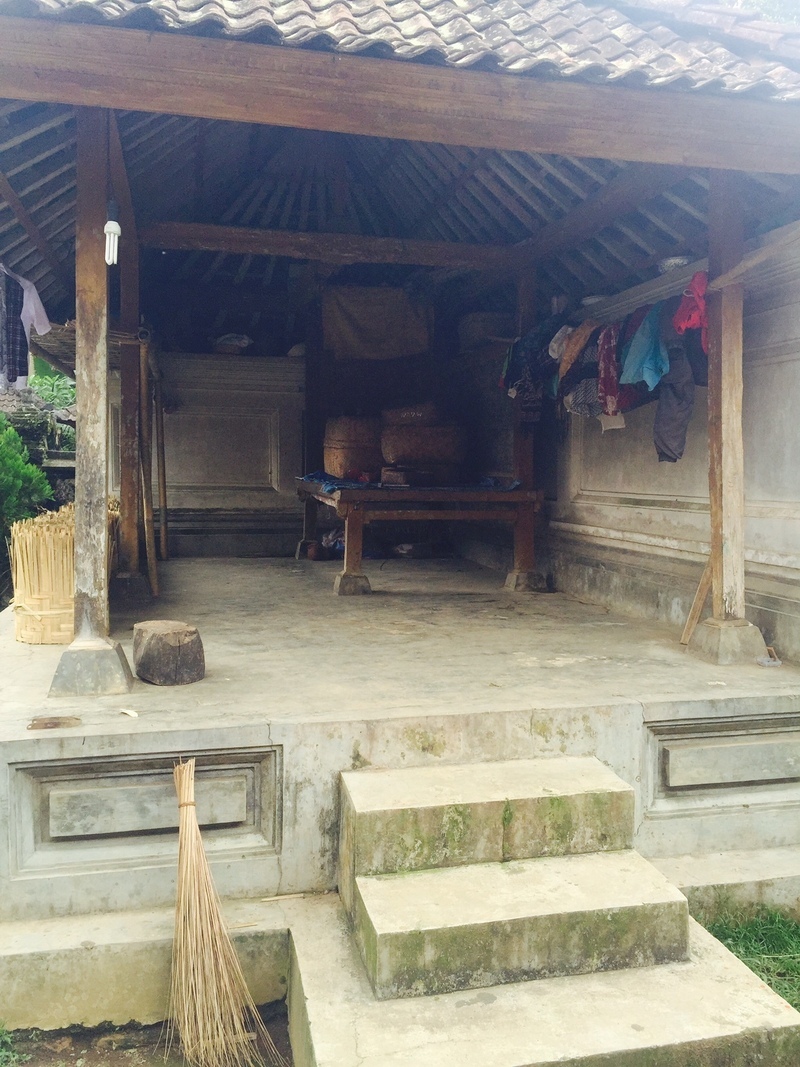 • There was another, completely open, building (except for a roof) that had a bed on it. We were told that this building is used for ceremonies - weddings, births, funerals. There are 3 types of Balinese weddings, and the one that stuck out the most to me happens to be the most common. Our guide referred to it as the MBA marriage, or Marriage By Accident. This is what happens when the girl gets pregnant first, and it's relatively common because "you gotta test the goods before you buy them" (yes, direct quote). It's really because the family wants to know that there is someone to continue the lineage and stay within the family compound, so if you can't get pregnant you get to live with mom and dad forever. We also learned about Balinese funerals (or really, the Cremation Ceremony, since the Balinese believe in reincarnation). When someone in a Balinese family dies, they are placed on the bed in the wall-less building as though they are simply sleeping. When it is time, the body is placed in a sarcophagus often resembling a lion (though there are two other animals it could resemble that I don't remember now). The body, in the sarcophagus is then processed to the temple, where it is burned. The ashes are collected, placed inside a coconut, and released to sea. This is a very expensive process, so lower classes will often bury the body and wait for the village's mass cremation, which occurs every 5 years.

• One of the most prominent structures within the family compound is the temple. Depending on where on the island the compound is, the temple is in the corner of the property that faces the sunrise and the highest mountain. These family temples are beautifully elaborate, with multiple shrines, and only members of the family are allowed to enter.

(If you have questions about Balinese culture, feel free to ask, as we learned quite a bit more than this. I've found that the history and culture here is so deep, and their religion so complex, that you can never stop learning about it). 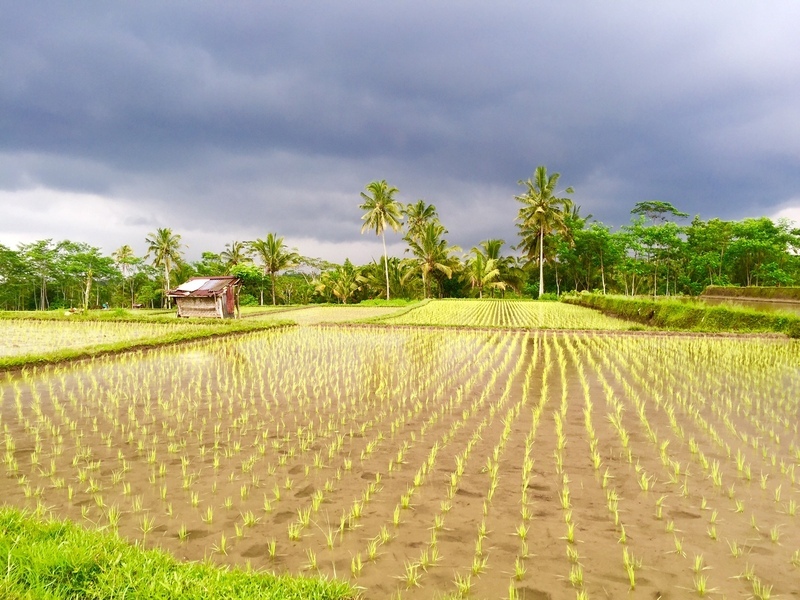 Once we finished our tour of the family compound we rode downhill some more to rice paddies, where we got off to see men planting rice. We were given the opportunity to try it, and I decided why the hell not, took my shoes off and climbed down with them. Boy was it surprising! I sunk in up to my mid-shins as the mud squeezed between my toes. (Hope the water and mud were cleanish since I have a bunch of mosquito bites)! I was handed a bunch of rice and told to place them in the grid system that was marked out. An older Balinese man quickly informed me that I wasn't putting them in deep enough when he shoved my hand even deeper into the mud.

And that's when the rain really started...it started as a drizzle but as it got harder we nestled under a small shelter in the rice field with the men. They took out cigarettes and lit up while we unsuccessfully tried to get our belongings out of the rain. Once it seemed to stop we rinsed our feet and hopped back on our bikes.

A little freakier now as the dirt path was now mud, and several times my back tire skidded out. As we continued biking it started to POUR. My initial thought was that we would be forced off our bikes and into the van. Boy was I wrong; we just kept going. The rain pelted my skin and the front tire of the bike sent a stream of water straight into my face as we continued downhill past lush greenery and small villages. And then the thunder and lightning (and a yelp from me) came, but we kept going. After a quick stop at a massive Banyan tree, we were drenched but finished (with the downhill portion).

At this point we were given the option of getting in the car and heading to lunch, or continuing on with the uphill portion of the ride. Jenna, Katie, and I opted to continue - North America, represent.

The uphill portion was NOT easy, and made me realize I need to get back to spin when I return to TX. The rain continued to pelt our skin, and at times it was so heavy that it seemed like we were biking through rivers in the road. The gears on my bike were loose, making it so I could not stand to peddle uphill, and my back tire kept skidding out - definitely not easy to keep moving uphill. That said, we eventually made it, looked like wet dogs, and celebrated with lunch (and beer) with the rest of the group. 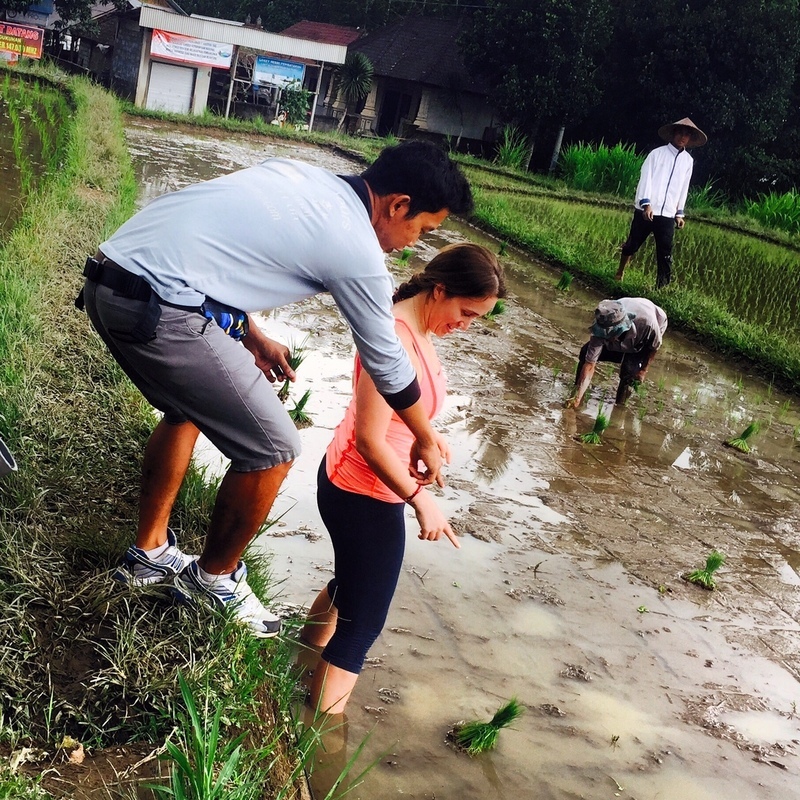 The entire time, through the rain, the back tire issues, all of it, I couldn't help but smile. Balinese on the sides of the road (in their covered shops) smiled and always said hello as we rode by, and it was so nice to be caught outside in a storm and just stick with it.